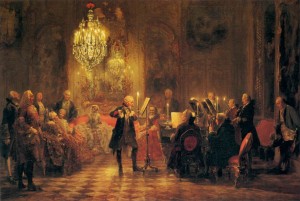 In May 1747 Johann Sebastian Bach travelled to the court in Potsdam, and it is to this visit we owe one of his most famous works. Bach, who was well known for his skill at improvising, received from Frederick the Great, himself a keen composer and flautist, a long and complex musical theme on which to improvise a three-voice fugue. Bach did so to the admiration of all present, but Frederick then challenged him to improvise a six-voice fugue on the same theme. The assembled public thought this just a malicious caprice by the King, intent upon humiliating philosophers and artists. Bach answered that he would need to work the score and send it to the King afterwards.

He returned to Leipzig to write out the Thema Regium (“theme of the king”). Two months after the meeting, Bach published a set of pieces based on this theme which we now know as The Musical Offering. Bach inscribed the piece “Regis Iussu Cantio Et Reliqua Canonica Arte Resoluta” (the theme given by the king, with additions, resolved in the canonic style), the first letters of which spell out the word ricercar, a genre taking the central role in this complete work.

6. Querendo invenietis
Canon a 2
Canon a 4